When we were very young, Mother greeted us with warm cookies as we arrived home after the first day of school. Sister and I were still brimming with energy, even after a long day of school work and new routine. Fresh cookies were the perfect invitation to sit for a bit and share together pieces of our day apart from one another. I remember the sweet memory of feeling full.

Full of joy. Full of happiness. Full of love.

It has been many years since my own children were little. They too were welcomed home with a plate of warm cookies after those delightful first days. They recall the excitement of our simple tradition and the joy of sharing. They too were filled.

There was plenty of time.

Today our youngest began his first day of his last year of high school. The last little one all grown up. The moment is already a memory.

And that time for the simplest joys? Where has it gone?

He’s looking ahead now. He’s preparing to move on. He’s not always in a hurry to come home and share his day.

But today, this last first day, I’ll have this plate of cookies waiting.

Let’s sit for a bit. 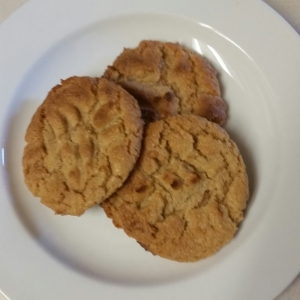 Mix 1 egg, 1 cup peanut butter,  and 1 cup sugar together. Use a small cookie scoop to drop dough onto a baking pan. Press with a fork. Bake 8-10 minutes at 350. Cool and Enjoy!

Our youngest son is running cross-country this year in high school. He began intense training throughout the summer, and decided to continue his commitment to the vigorous workouts of the regular season.

He really loves the feeling of finishing.

He really loves the social camaraderie among his teammates.

Cross-country is an awesome sport. Everyone should try this!

He really hates getting up in the morning and going to bed at night.

He hates flat feet and the fact that running does not always feel natural.

Cross-country is a tough sport. Why do people do this?

Despite this love/hate relationship with his chosen sport, he has dedicated himself to practice in anticipation of his first big race of the season. Last weekend that day finally arrived.

At the sound of the gun the race began.

23 minutes and 56 seconds later he crossed the line. He finished. Gasping for air, thankful to be alive, he discovered his place in the race… 100th!

That just sounds distinct doesn’t it? How many of us can say we have come in 100th? In anything? Just think about it!

And then came the compliments.

We’re so proud of you!

But then came the reality.

Reality tells us 100th place is not that great, even if there were 50 more runners left behind to cross the line.

Reality tells us we have a lot of work to do to compare to the first place finisher.

Reality tells us we should look into something that is a little easier to accomplish.

Sometimes we are really fortunate that our teenagers DON’T listen to popular reality.  100th place has not scared this runner away from continuing to invest time in doing what he loves, enduring the parts he hates, and striving to accomplish the goals he has set this season of his life.

Reality is this type of thinking.

It is not called finishing in 100th place.